This week, Nicola Sturgeon, First Minister of Scotland, made a ground-breaking statement.  No, it wasn’t about political independence.  It was about the political prominence of LOVE. 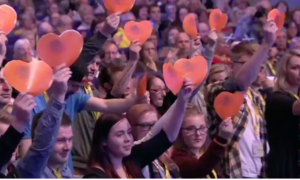 In front of 3000 conference delegates, she said:

“My view is simple: every young person deserves to be LOVED.  So let’s come together and make this commitment: to LOVE our most vulnerable children and give them the childhood they deserve.  That’s what inclusion means in practice.”

She then promised a “root and branch review” of the Care System.  Essentially, she wants to understand how LOVE got lost from the Care System, and how we recover it.  She wants to know how, despite the efforts of so many dedicated people, being raised in the Care System leads to statistics like these:

At a personal level, the part of her speech that most struck me were two short sentences:

“Recently I have been spending time with young people who have grown up in care.  Their stories have moved me deeply.”

So it wasn’t the statistics that most moved the First Minister, chilling as they are.  It was real life stories of loss.

I have discovered in my work how powerful stories are.  They are perhaps the best vehicle we have for moving others to a place of action.

I want, therefore, to use this article to tell another story, one that has been lost from our national consciousness.  I want to tell the story of a 3-year-old who went into hospital for a tonsillectomy in 1965.  Her parents’ loss, now long forgotten, played a crucial role in changing hospital practice.  Every parent today who takes a child to hospital benefits unknowingly from that couple’s story of pain and courage.

Why re-tell that story now?  One answer is that, if Nicola Sturgeon’s vision can be realised, then children in the Care System of the future will benefit from the determination that’s being shown now by the young people of Who Cares Scotland.  At their invitation, Nicola has committed to hearing 1000 of their stories over the next two years.  STV’s recent haunting documentary enabled us to share in five of those stories, including that of Laura Beveridge, who gave a deeply moving TED Talk in Glasgow in 2016. 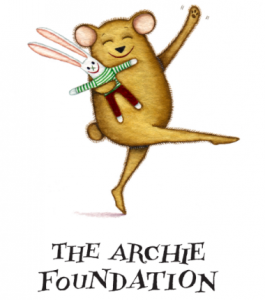 A second reason for reflecting on the history of children’s hospitals is that, on 3rd November, I’m going to embark on a wee risk myself.  I’m taking to the stage, as they say, with an entertaining show called TEDDY BEARS RULE.  It’s designed to give the public a light-hearted take on the science of attachment.

The evening is being held in support of The ARCHIE Foundation’s campaign for a new children’s hospital in Tayside.  It’s an apt partnership.  The study of attachment began in earnest in children’s hospitals of the 1950s.  ARCHIE’s work in hospitals today emphasises the importance of relationships, of emotional safety, of LOVE, for children’s healing.  Even their logo conveys that message, with their lovable little mascot firmly gripping his cuddly toy.

But it wasn’t always the case that hospitals recognised the importance of relationships.  That’s the point of my story of a child’s deadly tonsillectomy.

We begin in the early 1950s.  The war is over and the National Health Service has been established.  Thank goodness on both counts.  All parents can now obtain medical treatment for their children, whether in moments of crisis, like broken legs and bad asthma attacks, or for scheduled operations, like hernias and eye corrections.

One aspect of the care, though, is that much separation between parents and children will need to be endured. 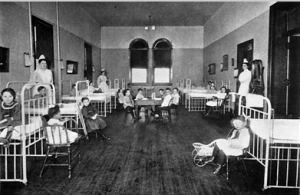 Standard practice for the 1950s was that parents were allowed to visit their children once a week, usually for one hour.  It didn’t matter the age of the child: 2 years or 3 years or 10 years.  Restricted visiting was simply the norm.  Besides, trips on public transportation could be cumbersome, there were typically other children at home who needed to be cared for, and husbands needed someone to make their tea.  (I am not joking.)  In some hospitals, the restrictions were even more severe.  In St Thomas’ hospital, children went one month before being allowed a visit, although their parents were permitted to observe them sleeping.  In London Hospital, children under 3 years old went without seeing their parents at all.  Parents could, if they wished, view them through partitions.

If this historic account leaves you a bit stunned, good.  I want us to be stunned that, not all that long ago, our society took for granted rules that sound unimaginable to our ears today.

If you are looking for someone to blame, don’t.  The system was filled with dedicated, hard-working people who simply did what was regarded as normal.  Curiosity will get us a lot further than blame.

If you are an adult who was once a child in hospital in the 1950s (or 1960s or 1970s), and you can remember desperately wondering where your parents were: THANK YOU.  Thank you for your strength then and your strength now, reading this article.  I know there are very many such adults living in the UK today.  Frequently you spontaneously raise your hands in my training events and share your stories of loss.  Thank you. 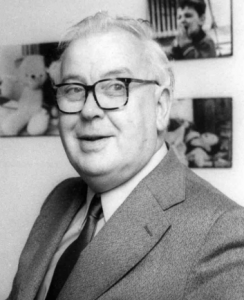 Back to my story.  A growing number of professionals and parents were concerned about this practice of restricted visiting.  Amongst these were the psychologists John Bowlby, Anna Freud, and especially James Robertson.  The data they were collecting led to the establishment of what would come to be known as ‘attachment theory’.  But the 1950s were still early days in the study of attachment and emotional trauma.

Robertson found that when he tried to talk about his data, it proved too threatening for medical staff to listen to.  They could not believe that their normal hospital practices could lead to lasting emotional damage.  They felt offended, their professional integrity impugned.  What Robertson was calling ‘emotional deterioration’, they simply saw as ‘settling’.  Once a child stopped crying, they regarded the behavioural problem as having been solved.

In fact, that was part of the reason for restricting parents’ visits.  When parents arrived, they not only brought ‘germs’, but also started off the children’s crying bouts again.  How were a few nurses to handle a whole ward of crying children, once their parents had departed?  Better to keep the parents away.

So James Robertson tried new steps in his campaign.  In 1952, he made a narrated film called A Two Year Old Goes to Hospital, in which he showed viewers what ‘emotional deterioration’ in a toddler looks like.  Did it help?  No.  The medical profession’s reaction was so intensely negative that he had to stop screening the film for a while.

Robertson integrated his efforts with those of others who were concerned.  They wrote letters, published papers, penned editorials, gave lectures, created opportunities for distraught parents to tell their stories. By 1959, the debate had grown so heated that a formal review was commissioned by the Ministry of Health, chaired by Sir Harry Platt, President of the Royal College of Surgeons.  His report called unreservedly for more humane care for children in hospital.  Guess what changed?  Very little.

So Robertson turned to the press.  He wrote a series of articles for the newspapers, inviting parents to send him letters about their experiences.  He collected together hundreds of them, which he published in a book called Hospitals and Children: A Parent’s Eye View.  One particularly harrowing story was told by a mother who re-mortgaged her house in order to pay for private treatment so that she would not have to be separated from her son while he recuperated from an eye operation.  In 1961, Robertson convinced the BBC to broadcast a television series on the “cruelty” of hospital care, which featured parents’ letters and segments from the several films he had by now made.  What changed?  Not much.

Do you know what finally finally finally proved to be the tipping point, after nearly two decades of concerted effort?  A story of loss.  A little girl, 3 years old, went into hospital for an ordinary tonsillectomy, and ended up crying herself to death. Literally.

It was 1965.  In line with usual practice, her parents were allowed to spend an hour with her on the day of admission but were thereafter prevented from seeing her.  They were informed, though, that their child had come round from the operation, as she was crying continuously.  The mother begged repeatedly to see her but was denied permission.  Three days after admission, her little girl was dead, having bled to death, surrounded only by strangers called hospital staff.  In a heart-wrenching letter, the mother wrote that she “could not help thinking that the continual crying caused the bleeding” and that she believed “her presence would have stopped the crying.” 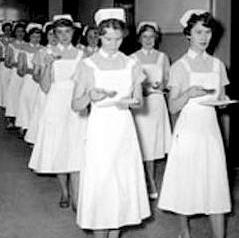 It’s a shocking story.  I want us to be shocked.  And I want us to be curious.  How is it possible that well-meaning staff could have failed to realise the importance of LOVE for reassuring a scared child?  How could their lack of understanding be so complete that she ended up drowning in her own blood?

If you think the way I’ve told this story sounds too extreme, that’s okay.  You can read the story for yourself, retold in the 2009 paper written by Dutch researchers Frank van der Horst and Rene van der Veer (pg 135).  The case was much discussed at the time, in the press, in the medical journals and by the Ministry of Health.  Whilst some leading medical professionals supported the mother’s view that her presence would have calmed and saved her child, others subtly blamed the mother for the death, suggesting that she had failed to adequately prepare her 3-year-old for the experience of being in hospital.

Blame.  It is such an easy option for us human beings.

The only light to emerge from this terrible story of loss is that it helped the tide to finally turn.  The Ministry of Health took a harder line on hospital visiting practices.  By 1970, restrictions had come to be regarded as unnecessary and unsuitable for young children.  It had taken two decades of campaigning.  Things still weren’t perfect.  But the tide had turned.  LOVE was being permitted to flourish in hospital wards.

Why am I telling that story in such detail now?  Two reasons. 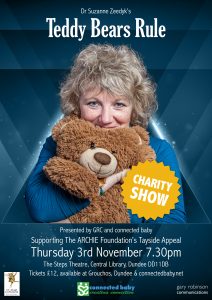 First, when I stand up on stage on 3rd November in Dundee, in aid of The ARCHIE Foundation’s campaign for cutting-edge hospital facilities, I want the evening to be entertaining, full of fun and laughter.  I won’t be telling this heart-breaking story.  But I wanted to put it on record, so that, as we walk into that auditorium, we fully appreciate the significance of ARCHIE’s attention to relationships.  ARCHIE gets it, and they are working to help ensure that others get it.  The money we raise that evening will help them continue that work.

Connection.  Laughter.  LOVE.  It is way too easy for us to take these basics for granted.

Second, Nicola Sturgeon’s speech about the Care System has filled many people in Scotland with hope.  Tears were shed as she announced her root and branch review.  I believe Nicola’s intention, and I have no doubt that the determined young people of Who Cares Scotland will hold her to account.  They have claimed their own stories of loss.  They have used their stories to drive long-needed change.

However, even hefty reviews do not automatically lead to action.  My history of hospital care reminds us of that reality.

I do not want to wait two decades to achieve the vision Nicola Sturgeon set out this week.  If our children in care are to experience the LOVE she seeks for them, and the LOVE they deserve, then it needs more than policy change.  It needs culture change.

That part is up to us.  We don’t have to wait for a governmental review.  We can start today.  We start with kindness and curiosity.  We listen to stories of loss.

One thought on “Stories of loss move us to action”