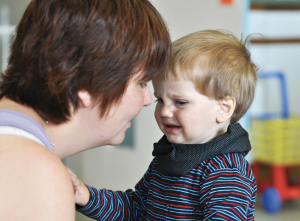 I reckon that, by this point in the coronavirus lockdown (Week 4 here in Britain), many parents are starting to find their children’s constant company tiresome.  I can hear incredulous whispers already: “By this point??  Are you nuts?? I reached that point on Day 3!”

And it will indeed be as whispers that the replies drift in.  Parents are often reluctant to admit this kind of truth.  They might express it as humour, but say it for real?  Nope.  That risks being judged as a poor parent.

Therein lies a problem.  If we can’t acknowledge to ourselves and others what we are actually feeling, then we have to shift into denial or projection or shame.  Those options don’t help parents or the children they love.

So what can parents to do in the moments when times get really tough?

The question about what parents can do is an interesting one not only for its practical value, but because it was being asked during the historic era that has become a touchstone for our current challenge:  World War II and its aftermath.  The person leading the public discussion at that time was paediatrician and psychoanalyst Donald Winnicott.  Throughout the 1950s, Winnicott shared the insights of his training in weekly BBC radio broadcasts.  He added his calming voice to the national debate about what a post-war Britain could look like.

You might find yourself wondering what topics he tackled.  Economics?  The creation of new political structures?  Renewing demolished transport infrastructures?  Nope.  Winnicott talked about childcare. 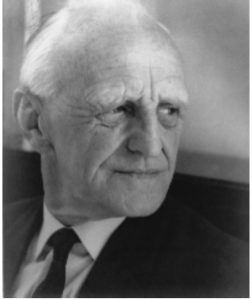 He believed that the sicknesses of a society were ultimately always attributable to the failure to support parents when they were in need. For Winnicott, the road to the new and better world began in the nursery.  It was grounded in parental love.

Many of Winnicott’s observations would have sounded radical to the mothers who made up his audience. (Yep.  It was mothers who tuned in.  It was the 1950s.  He was talking about childcare.  Who else would have been listening?)  Winnicott said: No, babies aren’t crying just to get attention.  They need cuddles.  Winnicott said: No, boys don’t need to be toughened up in order to grow up.  Sending them away to boarding school carries emotional risks.

The most radical thing Winnicott ever said relates to the question at the heart of this piece.  He told mums that there would be moments in which they would dislike their children.  In fact, he used even stronger language.  Winnicott said that sometimes the dislike would spike so intensely that they would hate their children.  He said that this was normal and predictable.  It didn’t make them a poor parent.  It made them a real person trying to do a hard job.

But how could a good parent ever hate their child?  It seems such extreme language.  Well, children are relentlessly demanding, needy, insistent, expectant.  Sometimes it’s just too much.  Sometimes the emotional pressure is overwhelming and impossible to manage.  You can feel trapped by all that intensity, and by your failure to fulfil your child’s hopes.  How could it be otherwise?  Failure becomes inevitable in the face of unremitting demands.

And it gets worse.  Children will have feelings about your failure.  Disappointment is a really tough emotion to manage, especially for a wee one whose emotional regulatory system is still under development.  So sometimes a child’s feelings will spike.  He or she won’t cope well.  Sometimes the intensity will become so great that your child will hate you for disappointing them.  Winnicott said those feelings, too, are normal.  It doesn’t make them a bad child.  It makes them a real person trying do the hard job of figuring out how life works. 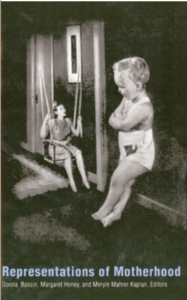 It can be tricky to talk about uncomfortable, socially unacceptable ideas.  An image is often better suited to the task – like this advertisement from the 1940s.  The image was chosen as the cover of the 1994 book Representations of Motherhood (edited by Bassin, Honey and Kaplan, published by Yale University Press) precisely because it is so haunting.  The towering baby is depicted as dominating the mother, who finds herself entrapped by his presumptuous demands.  This was the dilemma that Winnicott believed all mothers and children faced.  It remained unconscious unless it was brought to awareness.  He didn’t want mothers to have to muddle through that dilemma alone.

This was the most radical and important idea that Winnicott ever brought to the public: moments of intense dislike are part of healthy, loving relationships.

What isn’t healthy is denying those feelings.

Denying uncomfortable emotions doesn’t make them go away.  It doesn’t shrink them.  Instead, it feeds them.  Denying emotions makes it more likely that we will act on them in ways that are harmful to the very people we care for.

Winnicott’s training in psychoanalysis and medicine had led him to think long and hard about how the emotional needs of children can best be met.  And yet, the most significant insight he ever had was not about children per se.  It was about parents.  He believed that healthy societies were ones who permitted parents to acknowledge the full range of their emotions, both the discomforting and the joyous ones.  As a parent becomes more skilled in acknowledging their own feelings, they become better able to choose which actions will follow.  Knowing what we feel lets us take charge of our behaviour.  We don’t have to live at the mercy of our emotions.  Winnicott’s message seems as relevant today as when he was speaking it into a radio microphone, all those years ago.

Life gets easier when it’s lighter

Okay, you might be thinking, that maybe sounds nice for the bairns, but a pretty tough road for the parents.  Why on earth would a person want to be in conscious touch with unpleasant emotions?  Doesn’t that make your life harder?

Nope.  It’s ironic.  Being able to embrace uncomfortable emotions, rather than push them away, makes life easier.  That’s what Winnicott was trying to say.  Life gets lighter.  You stop taking things so personally.

Tension isn’t just about you.  It doesn’t have to be a judgement against you.  Intense feelings are a normal, messy part of relationships.  Your child needs to know that he or she can rail against you and that you will stay steady.  You need to know that you can fail to meet expectations and you’re still a good parent. You don’t have to beat up yourself with guilt or defensiveness.  And, crucially, you don’t have to beat up your child, either.  Nobody has to be to blamed or humiliated or punished.  Relationships are just hard.

When the events of Life feel less personalised, you end up better able to offer support to others.  You can ride out your child’s storm with them, even if they are aiming that storm at you.  You aren’t blown about by the gusts of wind.  You aren’t offended because they are aiming angry arrows at you.  You have a better chance of staying curious about what’s wrong.  You can offer help with those raging feelings.  You’ll be better able to listen.  Listening is, in itself, a form of helping.

Winnicott said that the more capable parents became of accepting their own uncomfortable emotions, the more capable they became of accepting their child’s.  We can forgive in others what we can forgive in ourselves.  He saw the ability to stay curious in the face of discomfort as underpinning what he called the ‘holding environment’.  Children raised in families where parents can create a holding environment grow up more emotionally resilient.

Put simply, Winnicott was saying you didn’t need to be a perfect mother (or father).  You need only to be good enough.  Winnicott left us many ideas of value, but I think his most powerful legacy is that guilt-relieving phrase: “the good enough mother”.

I reckon there are millions of parents out there who would love to hear somebody say that it is genuinely okay that they are finding their children’s constant company to be tiresome.  You don’t have to whisper it under your breath.  You can say it out loud to yourself.

Were he here, Winnicott would add: You really don’t have to live up to some mythical standard.  You are an ordinary person, trying to do your best in extraordinary times, as a parent, living in lockdown, with your kids — who are also trying to do their best, cooped up with you.

It is a message of self-compassion.  Be kind to yourself.  Take care of yourself.  Forgive yourself when you fail to live up to your own expectations.  Extend that forgiveness to others.  Your children didn’t dream of perfect parents.  They just wanted good enough ones.

So what can you do the next time the dislike starts looming?

How do you create a holding environment in a locked down household?  Here are some ideas.

For more on Winnicott, you might want to read:

In search of the good enough mother, by Jennifer Kunst, 2012

The school of life: Donald Winnicott

One thought on “Fed up of being cooped up in lockdown with the kids?”