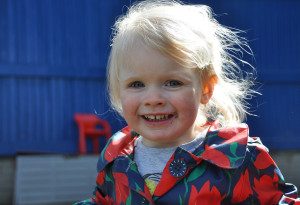 Childcare is all over the British media at the moment. The new Conservative Government has just announced that it plans to bring forward its proposals to double the number of childcare hours it funds, to 30 hours per week. That feels like it should be a good news story. It hasn’t turned out that way.

The Scottish Government, too, has been increasing the number of hours it funds. The entitlement is now 600 hours per year (roughly 16 hours per week) for all 3-4 year-olds, as well as 2-year-olds who are ‘looked after’ or whose parents are in receipt of benefits.

From an historical perspective, such policies are celebratory. During the Industrial Revolution, it was legal for the children we now care for in nursery – those aged 4 years old (yes, really, 4!) — to be put out to work, climbing up chimneys and scrabbling under massive machines. That now seems unbelievable.

However, the hourly rate being offered by Governments is being lamented by childcare providers. The average rate the Government offers, of £3.80 per hour, comes nowhere near the minimum rate required by childcare providers, of £5.50 per hour. And even a basic rate of such low value cannot possibly support the high quality provision called for by 20+ years of empirical research. One doesn’t need to know the detailed research findings to realise that £5.50 doesn’t equate to ‘high quality’. 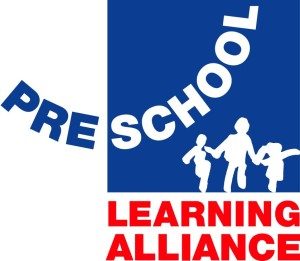 When Neil Leitch, CEO of the Preschool Learning Alliance, was interviewed on BBC Radio 4’s Today Programme on Monday, he acknowledged with regret and something approaching embarrassment that the childcare sector is often unable to meet the requirements for a living wage of £7.85 per hour. Fascinating. The early years are the period of time when brains are growing faster than they ever will again. Everyone who is in government has to be aware of that fact these days. It has been pointed out in multiple reports, presentations, media stories and committee enquiries. But we don’t wish to signal to the people who care for our children during the most fundamental period of their brain development how much they matter, by ensuring we can offer them a living wage? In 21st century Britian, our children aren’t worth £7.85 an hour?

These arguments about the inadequacy of funding are well publicised. I want to build on them by drawing attention to concerns that have received rather less attention in the debate. I want to talk about ways in which the current nursery policy actually risks damaging our children’s development, rather than enhancing it. 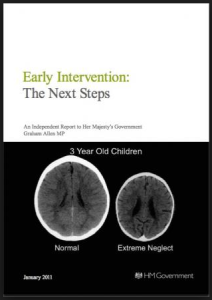 I am perplexed and frustrated by the situation in which we find ourselves. I argued earlier that every government official out there must, by now, have some awareness of the neuroscience and economics of early years. It is no longer excusable if they do not. This information has been covered at length in policy documents produced by all major parties. The coalition Conservative-led Government sponsored two major reports on early intervention in 2011, led by the MP Graham Allen.  The impetus for Labour’s national Sure Start Programme was derived from this scientific literature. The Scottish Government has funded the Early Years Collaborative since 2012, with attachment featuring as a ‘key change’.

WHAT DOES IT TAKE to help these same politicians recognise that they hurt not just individual children and families with inadequate childcare policy? They also hurt the whole of the society they were elected to serve, as shown in studies of Adverse Childhood Experiences. Moreover, the analyses of economists like James Heckman confirm that, in failing to invest in high quality childcare, they actually waste the money we have trusted them to spend.

I am not the only one worrying about these issues. John Carnochan, OBE and previous Co-Director of the Scottish Violence Reduction Unit, asks in his forthcoming book whether our childcare strategy is motivated by providing an enriching early years experience for children or by getting women back into work as quickly as possible. The charity What About the Children? has recently called for a complete rethink of a childcare strategy that seeks to increase nursery care for 2-year-olds, arguing that “babies need loving, not learning”. The Preschool Learning Alliance has charged that the current plans to expand government-funded childcare hours will force the entire sector into “meltdown”. They are trying to highlight the irony of the situation: the funding that makes a childcare setting free for parents is set so low that it could actually bring about the collapse of that setting. Other major organisations, such as the National Day Nurseries Association and PACEY, agree, emphasising the way in which funding rates facilitate or hinder staff being able to build robust relationships with the children in their care. 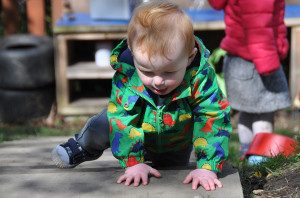 So it is worth throwing my hat into this august arena. Last week, I agreed to be interviewed on this topic by a press officer who was preparing an article for the Scottish press. I said, in a burst of frustration: “I wonder how well Nicola Sturgeon understands this science. She’s never yet been able to attend an Early Years Collaborative meeting. I wish she would just…call me!” The press officer said: “Can I quote you on that?” I replied, “Absolutely. Why not? Let’s get David Cameron to call, too!”

So, in case either of them miss that article, in their understandably busy lives, I am now repeating that invitation. Nicola, David, and any other interested politician at the local or national level: If you want to better understand how your policies are fundamentally shaping the brain development of all the children in the country, I would be happy to meet with you. 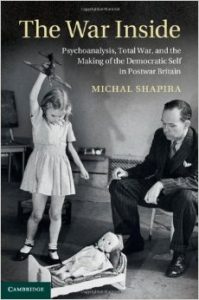 I feel strongly about this because nursery policy has dramatically more relevance for our new political landscape than any politician yet realizes. The historian Michal Shapira recently published a book with the intriguing title ‘The War Inside: Psychoanalysis, Total War, and the Making of the Democratic Self in Postwar Britain.’ In it, Shapira asks: what kinds of citizens does a democracy need? What capacities of compassion, empathy, and tolerance are needed, and how can those be nurtured? How do those capacities differ from the ones needed in fundamentalist societies, such as the society that the extremist group ISIS seeks to build?

In her book, Shapira argues that psychoanalysts working in the period after World War II re-shaped our thinking about democracy in fundamental ways that have gone unrecognised. Those psychoanalysts include people like Bowlby, Robertson, Winnicott, Freud, and Klein – all leaders of attachment theory. Attachment theory isn’t, ultimately, about babies. It is about us, about identity and belonging. It is about culture, past and future. 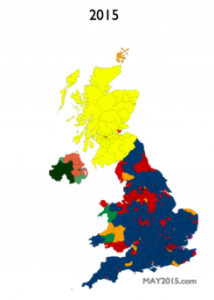 In 2015, the UK finds itself in the midst of a democratic earthquake. The Scottish National Party swept to success in the May election, with a vision of social equality that ousted the Labour Party, which had been trusted for decades. The Liberal Democrats, ambassadors of liberal values, were virtually annihilated. UKIP, with its wish to return to old-fashioned values, received a whopping 4 million votes. The Conservative Party has been successful in depicting itself as representing “hard working families who just want to get on in life”.

Shapira is trying to say that attachment theory holds the key to determining how we create a more effective democracy within this transformed landscape.

8 thoughts on “Nursery Policy and the Making of Democratic Citizens”