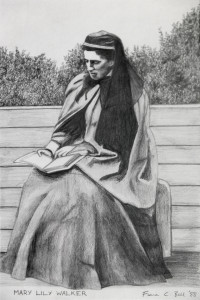 Friday, 30 November, marks a small but significant moment in the coming months, here in Scotland and especially in the city of Dundee.  Friday is the day that a committee on which I have serving formally announce a set of celebratory events scheduled for next June, which will celebrate the life and achievements of Mary Lily Walker.

Who is Mary Lily Walker, you ask?  It’s a good question, because her efforts as one ofScotland’s earliest Early Years Champions have been virtually forgotten.  The aim of the 4-day celebration, which will take place 27th – 30th June 2013 in Dundee, is to renew her memory and tell her fascinating story -– and also to see how her historic story can give us some novel insights into tackling the early years challenges we still face today, 100 years after her death.

Mary Lily Walker was one of Dundee’s leading social reformers.  Her death in 1913, at the age of only 49, brought to a sudden end a life that was in the midst of an outpouring of creative solutions to complex problems.  Dundee had the highest infant mortality rate in Scotland:  1 in 5 babies died under the age of 1 year.  New mothers typically returned to work one month after the baby was born, with the women being the labour force behind the success of the jute mills that were Dundee’s core industry.  Housing was described by some observers as “of such a disgusting nature…that it was impossible to describe.”  Others contended that “there was no town in the United Kingdom where men and women laboured under worse conditions than in Dundee.”  Soberingly, it was said by many skeptical commentators of the time that the reason such poverty existed was not because of immoral wages and toxic housing, but because careless mothers drank too much and failed to budget properly.

What was Mary Lily Walker’s response to this situation?  She got busy.  She established Scotland’s first infant health service.  She created an early form of maternity leave, via ‘Nursing Mothers’ Restaurants’.  She carried out a ground-breaking, systematic survey of the appalling health of Victorian children.  She designed an infant health visiting service, with trained professionals calling into new families’ homes and providing advice on raising babies.  She got herself elected as one of the first women onto Dundee Parish Council.  She devised and financed the first social work programme run by the University of Dundee.  She set up a community centre, Grey Lodge Settlement (above), which still operates today.  Mary Lily Walker was able to be successful on all these fronts because she recruited partnership from some of most dynamic professionals of her day:  city medical officers, doctors, factory inspectors, rent collectors, business owners, scientists, and especially the professorial staff at the University of Dundee, with whom she became closely acquainted upon enrolling in its very first student cohort in 1883.

In short, Mary Lily Walker was intuitively creating an early years strategy that looks much like ours today.  She was working with partners from a wide range of ‘sectors’.  She was giving attention to the wider social and economic environment that impacts on family life.  She was collecting empirical evidence that helped to support her case.  She was creating innovative initiatives that, once proven successful, she sought to have mainstreamed through City Council funding.  And she was willing to partner with anyone and everyone who wanted to contribute to the good of children and families.

There are many intriguing questions that arise when delving into the life of Mary Lily Walker.  What kept her from becoming a suffragette?  She was operating at a time of fierce debate about women’s rights, and one of her key concerns was improving women’s lives.  Some of her best friends were leading activists, in a town that was a hotbed for suffragette activity.  Yet this was clearly not part of her own identity.  What led a woman born into one of Dundee’s elite families to become deeply committed to the lives of families living in what would now be called a ‘socially deprived community’?  What led her to decide to live there, and to become a ‘well kent face’, embraced by the women of that community?  This was an approach to social change taken by only the most visionary of social reformers in Victorian times.

And what has kept us from remembering her efforts as a leading social reformer?  The guess of our committee, which has been carrying out historical research over the past year, is that it was a combination of three factors: her humility, her gender, and World War I.  Mary Lily Walker was deeply humble; contemporary friends who wrote about her often stress her resistance to being personally esteemed.  Indeed, there is only one known photograph of her: the one accompanying this blog.  In it, she does not look into the camera lens, but instead presents us with a quiet presence, dressed in her signature, self-chosen habit.  Mary Lily was also a woman, operating in a time when women were often not known even by their own name.  A good example is the fact that she was the driving force behind the “epoch making” 1905 survey published by the Dundee Social Union, but it was the men on the committee who were accorded the credit for the report.  Finally, Mary Lily Walker died in 1913, discouraged that she had made too little progress.  That ‘little’ progress was further stalled by the travails that became World War I, one year later.

But I do mean stalled, for shortly thereafter, in the 1920’s, Dundee came to be regarded as a pioneer in town planning, a stark comparison to its “desperate” reputation in 1900.  Mary Lily Walker’s campaigning had played a key role in this shift.  More striking, perhaps, is the realisation that her actions could be said to have played a role in the founding of the welfare state for the whole of Britain.  This very week in 2012 marks 70 years since the publication of William Beveridge’s 1942 report, the “revolutionary moment” that led to a change in the UK’s vision for itself.  Amongst the media stories broadcast this week to mark the occasion was a radio interview with Beveridge, in which he commented that the welfare state was an idea that he (and others) had been considering for 30 years.  This takes us back to 1912, to the preparations of the Royal Commission reports, which was the last major piece of work into which Mary Lily launched herself, before her untimely death the following year.

The centenary of her death presents the perfect opportunity to retell Mary Lily Walker’s story, and to explore how the lessons that she learned might assist early years activists today.  Thus, our 4-day event in 2013 will include a one-day early years conference, to which we have invited some of Scotland’s most innovative thinkers.  It will be held in the D’Arcy Thompson Lecture Theatre, named after one of Dundee University’s professors, who declared Mary Lily to be one of the best students he had ever taught, and who later became one of her very best friends.  The event will also include a charity ball, to raise funds for her beloved Grey Lodge Settlement.  A host of other components are planned, including a biography, an exhibition, a commemorative service, a civic reception, a family fun day, and walking tours.  We intend the spirit of Mary Lily Walker to thrive once more!

If you want to find out more about the Celebration Events, you can check out our website:  www.marylilywalker.co.uk.  There, you can sign up for the blog, which will provide regular updates about the many historic discoveries we’ve been making about her life.  You can also download and print the poster we’ve designed, and hang it in any public space near you.  You can follow us on Twitter or you can ‘Like’ Mary Lily on her new Facebook page

You can find a link to the Courier, whose major spread on this story has served as as our launch event  Soon, you’ll be able to buy a t-shirt or book a place at the early years conference.  And if you decide you want to organize your own associated event, just let us know.  We want as many people as possible to embrace her memory and her vision, so please do help us spread the word.

Before I wind up this blog post, I wanted to take a moment to thank all those who have helped us get this far.  Our organizing committee was self-elected, coming together out of an admiration for Mary Lily Walker’s work.   We have swelled with the energy of new volunteers, and every partner we have approached so far has given us an enthusiastic Yes!  We hope to hear from many more enthusiastic individuals in the months to come.

Personally, I often wonder what Mary Lily Walker would have made of the Dundee of today, had she walked out of her childhood home (which still stands, and which we’ll take in on our walking tours), and realised that the jute mills that had fuelled the terrible poverty of her day, as well as the terrible stoor that would have hung in the air, have gone.  I’ve even been known to talk to her, sitting beside her gravestone with a picnic lunch (which we’ll also take in on that tour), and I find myself telling her about the strides that Scotland is making in its commitment to an Early Years Movement.  These conversations have made me more aware of my own wishes and fears for that movement.  I am hoping that our Celebration Event is an opportunity for many more people to start having such conversations – at least with one other, and perhaps even with the spirit of Mary Lily Walker.